UDATE: Here is the letter Sophie Grégoire Trudeau sent to Lydia after reading my article: 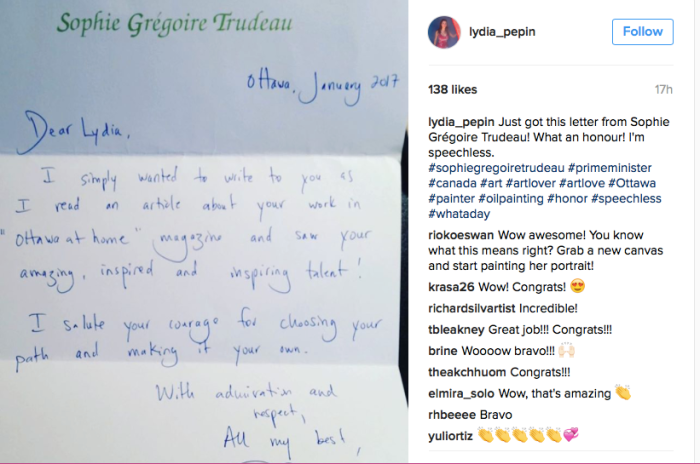 Lydia Pepin knew all along she had a creative impulse, but she didn’t make the leap to follow her passion until her mid-twenties.

“Even as a child I was always drawing and painting. I was more interested in art than sitting at a desk and doing math,” says Lydia. But as school no one was supportive of this budding passion. “I grew up with everyone pushing me away from art.”

After graduating with a communications degree from the University of Ottawa, Lydia got a job in the government which left her unfulfilled. “I was surrounded by wonderful people and the job was interesting. But I just had this creative beast inside of me that was stifled.”

She then had what she calls her quarter-life crisis. “It was my birthday. I was sitting at work in my cubicle, and I thought, what am I doing? I decided I had to take a chance – that I’d rather starve to death and do what I love than just miserable for the rest of my life.” She adds, “Everyone thought I was completely out of my mind when I left my government job, but I’ve never regretted it.”

Lydia learned about drawing and sculpting in a 3D animation program, and explains, “animation is really the Old Masters’ way. You put a lot of work into the light, the framing, the composition. You have a short amount of time to tell a story, so it has to be compelling.”

Working in Ottawa studios included making animation for cartoons with the Kratt Brothers Company (makers of the Emmy-award winning children’s show Zoboomafoo) and Jam Filled. although Lydia found a creative outlet working at the animation studios, there was still something missing for her.

“As much as I was surrounded by wonderfully talented and creative people, you don’t get to express yourself as much working for someone else.” So she started to paint in her spare time and decided to make the leap to being a full-time artist.

Lydia was drawn to portraiture with an “old-school” style of painting. “I’ve always loved observing people. There’s something wonderful about just studying someone and capturing everything that is unfolding in front of you to tell a story.”

In a very fortuitous turn of events, Lydia was approached by Major Jim Watson’s office with a commissions for a portrait of the Ottawa’s mayor. She was excited but nervous at the prospect of creating such an important painting. “I don’t want to just paint someone’s physical appearance. I want to capture their essence, the spark of light they have in their eyes. That requires time and focus,” says the artist, who took over 160 hours to complete the Mayor’s portrait.

Lydia says Mayor Watson was very approachable and likable subject to paint. “Despite his stature, he’s a very modest man and that’s what I wanted to capture.” To save him sitting for hours, Lydia interviewed him and than held an extensive photo shoot, noting “I don’t want to paint from one photo in particular – I combine them to tell the whole story.” the large 3×4 foot oil painting now hangs in Ottawa City Hall. 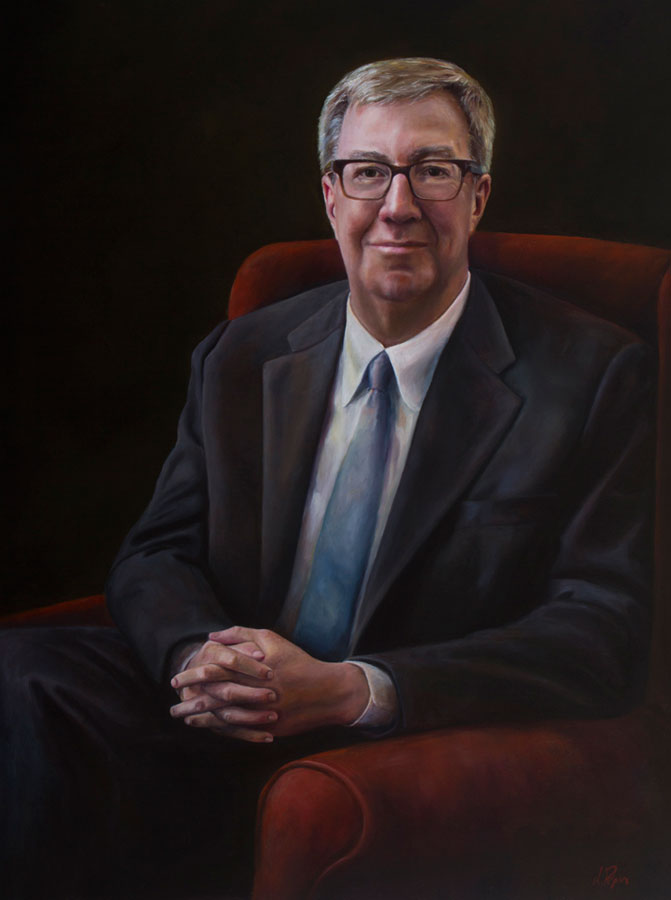 Having had such a wonderful start to her painting career, Lydia is thrilled to be embracing her creative side and is now looking to other projects. These include an exhibition of new works at Grounded Kitchen & coffeehouse, opening on December 10.

The artist admits there have been nerve-wracking moments and says, “there’s no secret recipe written somewhere on how to do this, but there’s no doubt in my mind that I made the right choice.” Now Lydia can paint for a twelve hour stretch and not realize the time. She adds, “When you love something so much it’s very engaging. I’m definitely doing what I’m meant to do.”

Check out one of my favourite articles in Ottawa at Home Magazine about an aspiring local artist making the leap: