When Sindy Hooper ran her first Ironman in the summer of 2012, she was in the best shape of her life. She finished the endurance race, which includes a four-kilometre swim, a 180-kilometre bike ride and a marathon, in 11 hours and 38 minutes, just narrowly missing qualification for the world championship by two slots – pretty impressive for her first time out.

In December that year, Sindy celebrated her 50th birthday and was already working toward her next Ironman. But nagging symptoms – abdominal and back pain, diarrhea and stomach cramping – were slowing her down. Going out on a 15-kilometre course one day, she found she could barely run. She went home and slept and when she got up her husband, Dr. Jon Hooper, saw her jaundiced eyes and knew something was wrong.

He booked her in the next day for an ultrasound and blood work. It was during the ultrasound that a large tumour was discovered on her pancreas and the radiologist gave Sindy the news: she had cancer.

“As soon as she said ‘cancer,’ that got my attention. I asked Jon if it’s a good one or a bad one to have. He said, ‘It’s a bad one.’ He told me if you can have surgery you have a much better chance of survival, but if you can’t you’re looking at three to six months to live,” says Sindy. Only 25 per cent of people are able to get surgery.

“That should send a very strong message to everyone out there to live your life to the fullest,” Sindy says. “Everybody thinks they’re invincible. You plan for your retirement, you think about your kids’ weddings and getting to see your grandchildren. But here I am, a person in top shape, in top health, with no family history of cancer, and I get probably the worst cancer you can get.”

Luckily, Sindy was able to get surgery. After recovering for several weeks, she also had to undergo 18 rounds of chemotherapy and 28 days of radiation. Since she was already registered for the Ironman that was coming up in Whistler, Sindy decided to go anyway and see what she could do. When she told her doctor, he was concerned. Typically, people on chemo don’t even want to get out of bed, let alone run, bike, and swim.

“All through spring and summer I had this routine where I’d go for chemo on Monday and come back and feel horrible. Wednesday I’d feel a bit better so I’d go for a swim. Thursday I’d go out on my bike. I couldn’t run at the time, but I’d go for walks and jog a bit,” Sindy says. “I always felt better when I was outside, biking and walking. It made me feel healthy and normal, as opposed to being a cancer patient.”

In Whistler, her husband stayed with her throughout the course. “We decided to go from one aid station to the next and stop if I couldn’t do anymore,” she recalls. “The swim was amazing and I did it in an hour and 15 minutes, which is a decent time for my age. Then we got on our bikes. The last 20 kilometres were all uphill, so I’d get partway and have to stop. I was worried we’d miss the cutoff, but we made it by 20 minutes.

“We got to the transition area. I said we might as well go on the marathon course. We had seven hours to finish, so let’s see how far we get. We kept going and going. The cutoff was midnight and we made it in at 11:30,” Sindy finishes.

She adds: “We were coming down the finishing chute and I was bawling. There were two things that seemed incomprehensible to me – learning that I had cancer, and then finishing this Ironman.” 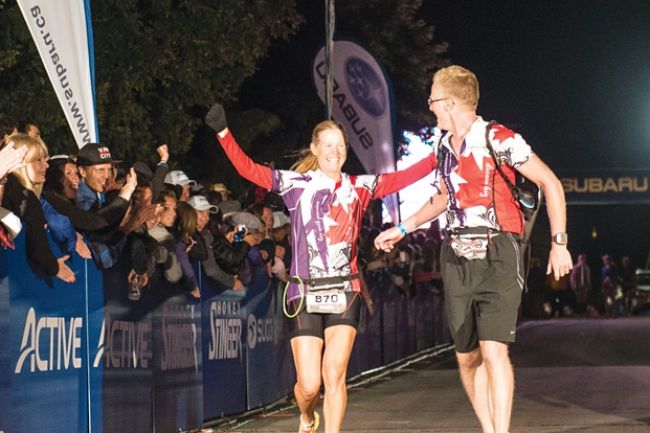 The five-year survival rate for pancreatic cancer is only six per cent. For all other cancers, the average five-year survival rate is 60 per cent and for breast cancer it’s 88 per cent. A recent CT scan showed a spot on her liver, though a further MRI didn’t detect the spot. So now, Sindy says, “that means three to six more months of healthy living, until the next scan!”

But last spring, she heard about Dr. John Bell, a senior scientist at the Ottawa Hospital Research Institute. Dr. Bell is developing a virus therapy that could replace chemotherapy, with fewer side effects. In the lab, it’s shown to kill cancers, even tough ones like pancreatic cancer. He’s started clinical trials.

“I had this idea to start a marathon team called Marathoners Gone Viral. My hope was to find 100 people who would run the Ottawa Marathon with me on May 24 and to raise $50,000 for Dr. Bell’s research,” Sindy says. So far, she’s managed to recruit 124 people and has raised $32,000.

“Fear has been a big part of my life over the last couple of years,” Sindy notes. “With the statistics this cancer has, it’s very, very hard to stay hopeful. But when I heard about his research, it’s the one thing that has given me some hope.”