Ottawa is a network of fabulous neighbourhoods, each with its own distinct charm, history, architecture and thriving local businesses. Four of Ottawa’s neighbourhoods – the Glebe, Westboro, New Edinburgh and the ByWard Market – are all older and central, each unique in their own way. Find out which one might fit your personal style #attitude.

With Carleton University at its southwest corner and uOttawa and Saint Paul University just a stone’s throw away, the Glebe is a central-Ottawa enclave for the academic set. This is definitely a walkable neighbourhood and bicycles also fill the streets in the warmer months. You’ll see more Tilley hats, organic fair-trade shirts and Birkenstocks here than in other parts of the city.

The Glebe loves its coffee shops and the locals can be found balancing books, laptops and lattes on nearly every corner. They pair their steaming coffees with an amazing selection of treats, whether it’s a bagel from Kettleman’s, a vegan muffin from the Wild Oat Bakery or a croissant from the French Baker. But Glebeites work off those carbs as they jog, cycle, in-line skate, kayak and ice-skate their way up and down the canal between Dow’s Lake and the Pretoria Bridge.

For those who like a stack of magazines and newspapers from around the world on their coffee table, Brittons is the go-to source for their beloved periodicals – and, of course, Ottawa at Home magazine.

But the Glebe is not all serious academe. Rock star Alanis Morissette hails from this neighbourhood and went to high school at the Glebe Collegiate Institute. She even sang the national anthem at the former Ottawa Rough Riders’ games at Lansdowne Park. Now, Lansdowne sports the exciting new TD Place, where you’ll find Ottawa’s new CFL team, the RedBlacks.

A combination of upscale urban development and a hint of retro in its tree-lined streets, Westboro is perfect for hipsters. The neighbourhood’s exact borders are debated, but it lies generally between Island Park Drive and Golden Avenue, to the east and west, and the Ottawa River and Carling Avenue, to the north and south. Westboro was a village until it was annexed by Ottawa in 1949 and, in postwar fashion, many of its avenues bear names from that time, including the iconic Churchill and Roosevelt. Tiny bungalows common to the era also dot several Westboro streets.

It also has, however, some of the region’s most luxurious homes and trendy glass condos that give the neighbourhood a modern flair. The restaurant scene has exploded in Westboro, with elegant eateries like Gezellig, Juniper and Savoy catering to the local crowd. You’re likely to see skinny jeans, thick-rimmed glasses and newsboy caps on patrons sipping martinis at places like the funky Trio and micro-brews at the Clocktower Brew Pub.

A mecca for the affluently athletic, you’ll see SUVs topped with kayaks or Thule boxes heading towards the Gatineau Hills, across the Ottawa River, which can be seen from the Westboro streets, and calls these urban residents to outdoor adventure.

To prove Westboro’s hipster credentials, it even has its own music and arts festival that takes place every June and draws big name artists from across Canada.

Westfest draws thousands of visitors and prides itself on being the only festival of its kind that is totally free. It’s just Westboro’s way of spreading the love.

You know your neighbours are movers and shakers when one of them is the Governor General of Canada and the other is the prime minister. While New Edinburgh might hold these two important official residences, it’s also known as a community that attracts business leaders as well. In fact, a good portion of the neighbourhood bears the family names of one of Ottawa’s first entrepreneurs, Thomas McKay. He was one of the creative forces behind the Rideau Canal, and named the area after his birthplace of Edinburgh in Scotland. Crichton Street, where you’ll see dancers gliding in and out of The School of Dance, was named after his wife’s maiden name.

New Edinburgh, which lies just to the east of Ottawa’s downtown business district and is bordered by the Ottawa River and the Rideau River, is a peaceful corner of the city while still being very central. It’s perfect for visitors who want to stay plugged into the community and residents who appreciate homes displaying the bricklaying, woodwork and fine glass skills of yesteryear’s craftsmen.

There are more suits and satchels in New Edinburgh at the beginning or end of the workday, but the locals also know how to relax. In the warmer months, they can wander up to Ottawa’s newest farmers’ market, the Beechwood Market. For a gourmet treat, Farbs Kitchen and Wine Bar specializes in local ingredients, while the passionate young cooks at Fraser Café offer wine and beer tastings.

Each summer in New Edinburgh Park, a tranquil getaway along the river, the New Edinburgh Community and Arts Centre puts on the Lumière Festival. It’s a whimsical evening when the park is alight with lanterns and populated by wonderful performers. Just proof that the folks here aren’t all work and no play.

While it might be one of Ottawa’s oldest neighbourhoods, the ByWard Market is the perfect downtown setting for modern trendsetters. It has a vibrant mixture of quaint,  19th-century homes and chic, ultra-modern architecture. And, like some of Ottawa’s other central neighbourhoods, the ByWard Market is undergoing a boom of condo development, bringing a new urban crowd downtown. 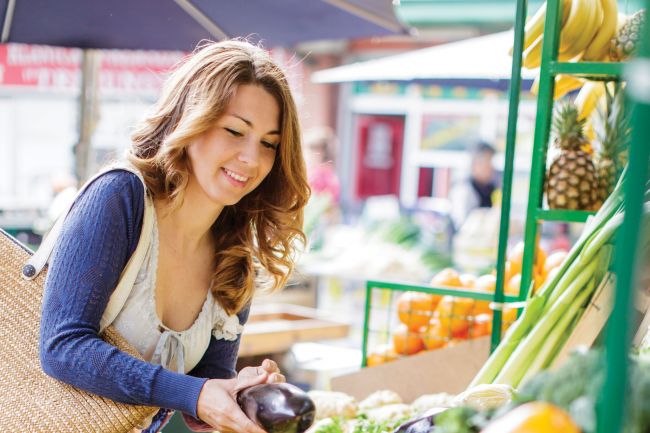 It’s no wonder people flock to this area – it’s home to some of Ottawa’s trendiest hot spots. Salons, including York Street Spa, Texture and Rinaldo pamper the city’s elite clients. Boutique shopping along Sussex and Dalhousie offer the full fashion spectrum, from the haute couture of Justine & Justina to the urban cool of Schad or the rock ‘n’ roll tea-party esthetic at Victoire.

In the Market’s streets, you’re more likely to see high heels and sunglasses, especially around the National Gallery of Canada, or maybe a plaid shirt with a splash of paint on the cuff outside the Ottawa School of Art. Exquisite art and sculpture can be found around nearly every corner of this high-energy neighbourhood, which also draws musicians and lovers of live music. The cool Mercury Lounge celebrates soul and The Rainbow Bistro brings the best of the blues to appreciative audiences.

But perhaps the best part of the Market is the amazing food. There’s no reason to go hungry with farm stalls offering seasonal produce and restaurants galore featuring some of Canada’s best chefs. Sidedoor Contemporary Kitchen & Bar’s chef Jonathan Korecki, was a finalist in the second season of Food Network Canada’s Top Chef Canada, while chef Rene Rodriguez of Navarra Restaurant took home the title in season four. It’s a place where you can always taste the latest trends in food.